God working with our hands 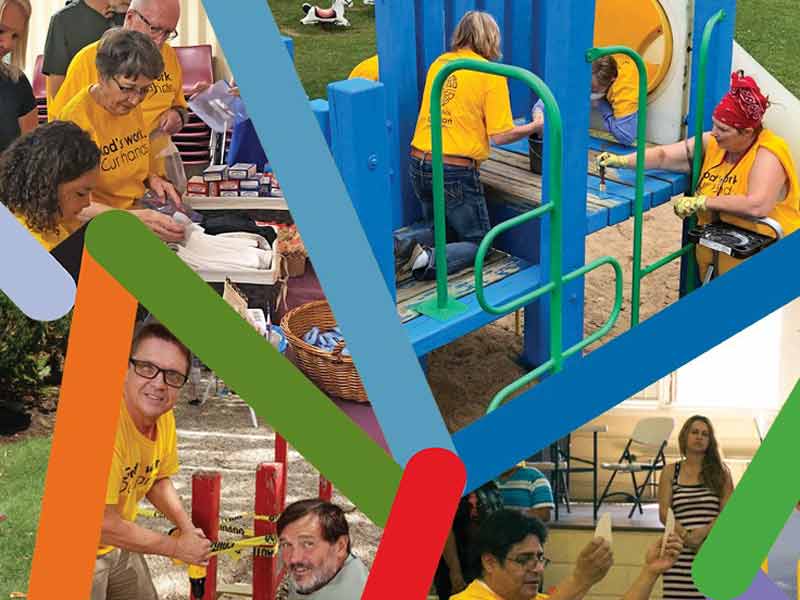 For the past few years the Evangelical Lutheran Church has encouraged members to participate in a “God’s Work. Our Hands” Sunday in September.  The church’s website explains the purpose of this.

This day is an opportunity to celebrate who we are as the Evangelical Lutheran Church in America — one church, freed in Christ to serve and love our neighbor.Service activities offer an opportunity for us to explore one of our most basic convictions as Lutherans: that all of life in Jesus Christ — every act of service, in every daily calling, in every corner of life — flows freely from a living, daring confidence in God’s grace.1 https://www.elca.org/dayofservce

The basic idea here, service to benefit our neighbor and awareness that it is God’s work that we’re doing with that, is undoubtedly good. But reflection on some Facebook conversations about this has made me realize a couple of things. The first is that there’s something that we need to watch out for. The second is that we have an opportunity here for a teaching moment in which some important ideas that play a role in theology-science discussions can be conveyed.

That thing to watch out for is our ever-present tendency, as sinful human beings, to think that we need to be able to claim some merit for the good works that we’ve done. It would be especially meritorious if we could do more than is really required. (I remember from college teaching days students asking what they could do for “extra credit” near the end of a term.)  That kind of thinking about earning merits was one of the things that brought about the Reformation. We need to remember Jesus’ sobering words to his disciples in Luke 17:10. “So you also, when you have done all that you were ordered to do, say, ‘We are worthless slaves; we have done only what we ought to have done.’”

Is there anything in that statement from the church that I quoted that might encourage people to consider themselves meritorious if they engage in works of service?  I guess it depends on how the words “God’s work” are understood.  “Work” is a noun, and “God’s work” can mean the work that God wants to be done, kind of like a To-Do list for us.  Then it’s up to us to have “our hands” do the tasks on that list.  And when the work is done and we’re the ones who have done it, surely we ought to get some credit for that.

But God is never inactive — “Unresting, unhasting, and silent as light” we sing in one hymn.2 Evangelical Lutheran Worship (Minneapolis: Augsburg Fortress, 2006), Hymn #834, verse 2.  That’s why I chose the title “God working with our hands” for this article. It’s not as snappy as “God’s work. Our hands” but it conveys unambiguously the idea of God’s activity in the work of service that’s being done. God is active in everything that takes place in the world

God’s action in the world

That’s just one example of what is referred to in discussions of science and theology as the subject of “divine action.” Careful study of phenomena show that processes in the physical world fall into definite patterns that scientists try to describe with what they call “scientific laws” — conservation of energy, the laws describing the basic natural forces, and so on. Christian faith says also that God is doing things in the world — providing our “daily bread” and other necessities of life.  So how are we to understand that work of “providence” or “continuing creation” together with the activities of bodies and fields and forces that science studies?  A number of different ways of thinking about this have been suggested.3 Between his Religion in an Age of Science (San Francisco: HarperCollins, 1991), Chapter 9 and its later edition as Religion and Science: Historical and Contemporary Issues (San Francisco: HarperCollins, 1997), Chapter 12, Ian G. Barbour discussed a total of ten theologies of divine action.

One traditional approach goes back to Thomas Aquinas. He saw God as the First Cause who was active in the world through second causes associated with things in the world.  In other words, God’s action in the world is mediated through creatures.

(On the other hand, God’s initial creation of things ex nihilo was unmediated, there having been nothing for it to be mediated by.) Similar ideas were developed by both Lutheran and Reformed theologians in the period after the Reformation.4 Benjamin Wirt Farley, The Providence of God (Grand Rapids, MI: Baker, 1988).] The key idea is that God and creatures cooperate in everything that happens in the natural world.4 The word “concurrence” is sometimes used instead of “cooperation,” but it’s somewhat weaker.  The concurrence implies simply “flowing together,” as though God and the creature just act alongside one another, while cooperation means working together.5

We can express that by saying that God uses creatures as “tools” or “instruments” to accomplish the divine work.

There are regularities in the way things happen in the world that we systematize in scientific laws. God presumably could work with creaturely instruments in arbitrary ways but at least in the vast majority of cases doesn’t do so. This is a gift because it means that we can live in the

world, understand what’s going on, and know something about what the future will bring. This can be put in philosophical terms — God does not exercise absolute power but ordained power.

That is, God acts in accord with rational ordinances or laws which God has established. But we can also put this divine self-limitation in more clearly theological terms. Divine action is kenotic, following the pattern of Christ’s kenosis, or “emptying” that Paul speaks of in Philippians 2:7.  This doesn’t mean that God is ever absent or inactive in the world, but that God limits action to what can be accomplished with the laws that God has ordained.

Because we can learn the properties and capabilities of God’s tools, we can understand what happens in the world in terms of what those tools do. We can never observe the creator at work, but only the tools the creator uses.  So those things within the world are not just the tools of God but, in Luther’s phrase, God’s masks.

“What else is all our work to God — whether in the fields, in the garden, in the city, in the house, in war, or in government — but just such a child’s performance by which he wants to give us his gifts in the fields, at home, and everywhere else?  These are the masks of God, behind which He wants to remain concealed and do all things.”6 Martin Luther, “Psalm 147” in Luther’s Works 14 (St. Louis: Concordia, 1958), 114.

And that reference to “our work” can remind us that we are also instruments that God uses. The old hymn “Take My Life, That I May Be” works that out in details, offering not only our hands but all our bodies and faculties and possessions for God’s use.7 Evangelical Lutheran Worship (Minneapolis: Augsburg Fortress, 2006), Hymns # 583 & 685.  That’s exactly the idea behind the “God’s work. Our hands” — or “God working with our hands” — theme.

But unlike screwdrivers or calculators, we can refuse to cooperate with God’s work, or perform it in a lazy and half-hearted way. In things of this world we have a certain amount of free will8 Article XVIII of the Augsburg Confession in Robert Kolb and Timothy J. Wengert (eds.), The Book of Concord (Minneapolis; Fortress, 2000), pp.50-53; and can be, as Luther puts it, “rusty tools.”9 This is not  in the English edition of Luther’s works but is quoted by George W. Forell, Faith Active in Love: An Investigation of the Principles Underlying Luther’s Social Ethics (Minneapolis: Augsburg, 1954), 92.

If we wonder why God doesn’t do something about an obvious problem in the world, it may be that God is doing as well as possible, like a carpenter trying to do the best job with a rusty saw and bent nails.

Human beings are God’s created co-creators whose purpose is to be the agency, acting in freedom, to birth the future that is most wholesome for the nature that has birthed us — the nature that is not only our own genetic heritage but also the entire human community and the evolutionary and ecological reality in which and to which we belong.

Exercising this agency is said to be God’s will for humans.11 Ibid., p.27. We are God’s creatures created to be creators with God. The point is not that we are capable of bringing things into being ex nihilo, but that we are to be active participants in the ongoing work of creation. In comparison with the more traditional picture which we sketched out earlier, the implication is that here humans play more of an active role in determining how nature will develop. God is not going to be micromanaging our work but gives humanity a good deal of responsibility for the course that creation will take.

Is there any biblical warrant for that grand picture? Some may think of the text in the first creation story in Genesis (1:26) in which humans are assigned “dominion” over the earth and its creatures. That text has, we know, been terribly misused with the notion that humans are the only creatures that really matter, and that we can exploit the others for our own benefit. I would prefer to think of a biblical text that is free from some of the associations that the “dominion” text has, Psalm 115:16: “The heavens are the LORD’s heavens, but the earth he has given to human beings.”

The created co-creator proposal makes it clear that we are made not just to work for the good of our species but to “to birth the future that is most wholesome for the nature that has birthed us.”  The view here is not just to service tasks that can be completed in a weekend (though those aren’t excluded) but work for the benefit of the whole natural world.

I’ve indicated that the created co-creator gives considerably larger scope to human decision making and activity than the more traditional view. We could note that humanity has developed to the point at which some of our tools seem to be on the verge of taking on a life of their own and consciously working with us. We ourselves are intelligent beings made (through the processes of evolution) by God. In relation to God we are forms of AI, Artificial Intelligence.  Some years ago Noreen Herzfeld used different views of what it means for humans to be created in the image of God to explore reasons why people pursue the possibility of creating artificial intelligence and attitudes toward AI.12 Noreen L. Herzfeld, In Our Image: Artificial Intelligence and the Human Spirit (Minneapolis: Fortress, 2002).  In turn, some of the thinking that has been done about AI might help us to elucidate the concept of humans as created co-creators.