Church, pandemic and thoughts about telecommunion 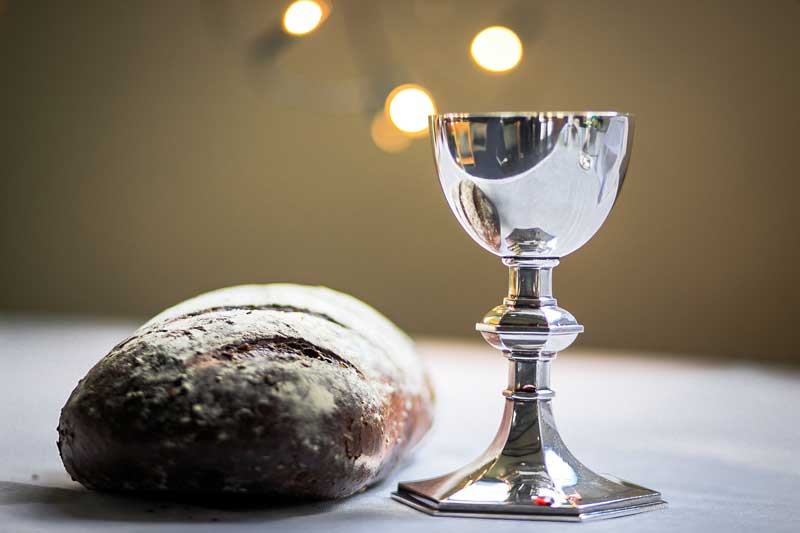 Photo by Jason Coleman via Unsplash

Telecommunion is one I just coined (I think) to mean communion, the Lord’s Supper, at a distance. The idea has some history, but has come to the fore with concerns about public worship during the COVID-19 pandemic, with gatherings of large groups discouraged or prohibited.

When I was in seminary 40 years ago, some television evangelists would celebrate communion with their audiences over the air. Viewers put wafers and little cups of grape juice in front of their sets, the evangelist would do what he or she thought appropriate, and the viewers would eat and drink. I and I suspect many others with high eucharistic theologies were dubious about this.

Televised Roman Catholic celebrations of mass are not uncommon, but they don’t involve actual reception of the sacrament through that medium.

Technology has, of course, developed beyond old fashioned television. Some 20 years ago I served on a task force for the Episcopal Diocese of Ohio to develop a statement on “The Incarnation and the Internet” (adopted in 2001). This dealt with questions for and about the church in the age of cyberspace. I wrote the brief remarks on the sacraments there, dismissing the possibility of conveying them via the internet. Today I would not be quite so dogmatic.

The church in plague time

If those questions seemed purely theoretical at that time, they have become urgently practical with the COVID-19 pandemic. How can the church be the church when it’s not safe for members to gather in the same place and governments may, for public health reasons, prohibit large gatherings?

The church is, according to Article VII of the Augsburg Confession, “the assembly of all believers among whom the gospel is purely preached and the holy sacraments are administered according to the gospel.”1 “The Augsburg Confession” in Robert Kolb and Timothy J. Wengert (eds.), The Book of Concord: The Confessions of the Evangelical Lutheran Church, p.42. There are several aspects of that definition that need to be addressed if the idea of worship by means of electronic media, and telecommunion in particular, are to be pursued.

Note that “the assembly of all believers” here means, to begin with, the whole church catholic. “All believers” can’t be gathered together physically at one time, but parts of that totality are “assemblies”. That word points to the inadequacy of individualistic “Me and Jesus” ideas of Christianity. A physically isolated believer is still part of the church.

Assembling is an important feature of the church, and corporate worship, preaching and the sacraments, are essential. We need to hear the words of absolution and the proclamation of the gospel from outside ourselves, and the Lutheran church has always opposed the practice of “private masses.” Holy Communion is by its nature communal.

When we think of an assembly of people, we probably picture them gathered in the same room or building. But today we’re used to getting together remotely for conferences, classes, or family chats on platforms like Skype or Zoom. Those assemblies take place via electrical currents and electromagnetic waves, but are no less physical assemblies than old fashioned gatherings with direct sight and sound.

Talk about “the web” and “cyberspace” in reality and science fiction may suggest that when we use the internet we enter into some mysterious new reality, but it depends on the same physics as things in our everyday world, the world in which the Word became flesh. If we assemble in cyberspace, the people and the means by which they communicate are in the same three-dimensional space as the chairs we’re sitting on.

In church on a typical Sunday morning, the readings and the sermon come to us as pressure waves in the air. Perhaps our hearing is aided by electrical amplification of the PA system. On special occasions there might be so many worshippers that some would be in the education building next door. The word might then come through Wi-Fi using electromagnetic waves. These would then be converted back into sound and visual images for us.

The service can be spread over a wider area. Church services have been broadcast over radio since the 1920s, which has been valuable for those who can’t get to church. Television and videos via the internet add the visual component.

All that may seem obvious, but I’m making two points. First, those means of remote involvement in worship are no less physical than the sound and light we hear and see in a conventional service. Secondly, the difference between Wi-Fi for worshippers next door and for those a great distance away is purely quantitative. People can participate, hearing and responding with hearts and minds, in one location as well as in the other.

Will those remote assemblies be real communities? How well can we really know people with whom we interact only at a remove of hundreds of kilometers? That may work well for televangelists asking for money, but how about for pastoral care and “mutual conversation and consolation of believers”? Worship mediated electronically will be most authentic in areas about the size of the territory in which the membership of a congregation today lives. It will be an area larger in rural parts of the world than in cities.

Sacraments at a distance

The spoken word can be shared remotely, but what about the “visible [and tangible] words” of baptism and the Lord’s Supper?3 Augustine used the phrase “visible word” in reference to baptism. Cf. Robert W. Jenson, Visible Words: The Interpretation and Practice of the Christian Sacraments (Fortress, 1978). How can water be poured or a person be immersed, how can bread and wine be consecrated and shared, remotely? There are serious questions here, and individual pastors and congregations shouldn’t start new practices without consultation and some agreement with the larger church. There are too many bad examples of Lone Ranger “ministries” on the air and on the web already.

Baptism poses no serious problem. Even in a pandemic it could be safe for a pastor and immediate family of the candidate to gather. And if that’s not possible for some reason, any Christian can perform a valid baptism.

Then we come to the question of sharing in the Lord’s Supper via television or the internet. This question has gotten particular attention with the onset of the COVID-19 pandemic because for many Christians, receiving the sacrament weekly is the norm. (“Among us the Mass is celebrated every Lord’s day and on other festivals” Is the confessional Lutheran position.4 “Apology of the Augsburg Confession” in The Book of Concord, p.258.)

Those proposing such celebrations have called it “virtual communion”, but that is an unfortunate term. “Virtual” may mean “almost real” or “not quite real” but can sometimes mean the opposite of real, as with virtual and real images in optics. If — I emphasize, if — such a communion is valid, if those who eat and drink the elements consecrated remotely receive the body and blood of Christ, then it is real, not virtual, communion. That is why I’ve proposed the term “telecommunion.” It will initially be unfamiliar, but it’s better for people to ask what a word means than for them to think they know what it means but don’t.

But can such celebrations be valid? I won’t get into old discussions of exactly what needs to be said to make a valid consecration of the Lord’s Supper, but will simply assume that it’s done. Nor will I enter into debates about who has the authority to do this. Ultimately, it’s Jesus’ promise that he will be present for those who eat and drink that makes it work. However, someone must say of bread and wine “This is my body” and “This cup is the new covenant in my blood.” What bread and wine is referred to?

Traditional liturgical instructions can be quite specific here. The elements to be consecrated are to be on the corporal cloth on the altar. In consecrating the elements, the presiding minister is to touch every container than has bread or wine. Such directions may seem very picky and almost magical. But the point is that the words of the presiding minister refer to this bread and this wine, not to the bread and wine in the sacristy or all of it within the sound of his or her voice.

Some variation is frequently observed here, such as leaving some of the bread and wine on the credence table until the distribution. That is, however, not the ELCA’s recommended practice.5 The Use of the Means of Grace (Augsburg Fortress, 1997), p.50.] And it’s worth noting that in the Book of Common Prayer there are directions for consecrating additional bread and/or wine if the initial amount is inadequate.5 The Book of Common Prayer (Church Publising, 1986), pp.365 & 408.

The challenge this poses to the idea of remote communion is clear. Is it sufficient to argue that the presiding minister’s intention is to consecrate the elements in front of the screens or sets of those participating in the service and to no other? Such appeals to “intention” in connection with sacramental acts are very shaky. They can leave people wondering if what was done was really legitimate because they can’t know for sure what the minister intended.

There’s a way to deal with that, but it involves a couple of ideas, one or the other of which will seem problematic to Christians of different traditions. The first is that a group of Christians that can’t have an ordained pastor for an extended period of time can choose one of their members to serve as their pastor. Luther argued that in his “Address to the German Nobility.”6 Martin Luther, “An Appeal to the Ruling Class of German Nationality as to the Amelioration of the State of Christendom” in John Dillenberger (ed.), Martin Luther: Selections from His Writings (Doubleday, 1961), p.408).

That doesn’t mean that under ordinary conditions any Christian can just decide that he or she will preside on a given Sunday. The Augsburg Confession says that no one should do that “without a proper call”7 “The Augsburg Confession”, p.46, in Kolb and Wengert, The Book of Concord.8 (which will mean something different in the 21st century from the 16th). But now we’re talking about an extraordinary situation.

The other practice that could be used is “concelebration,” in which there are a number of presiders. That is sometimes done in the Roman Catholic church, with multiple priests, and only priests, celebrating the eucharist together. Lutherans generally don’t do that, but there’s no compelling reason not to.

In a remotely linked congregation then there could be, ideally, a properly called and ordained pastor in one location and a number of small groups in others. Each of those latter groups would select one of their members to be their co-celebrant, and that person would, with the ordained pastor, say and do the appropriate things with the communion elements for that group. This would take place in a service with scripture readings, a sermon, and prayers.

I am not in a position, as just one ordained person, to say, “It’s okay now to do this.” I offer that idea only as a possibility for the larger church to consider. For the present, this statement issued by the Worship Team at ELCA headquarters recommends that people not be encouraged to practice so-called “virtual communion.” (See the third paragraph from the end.)